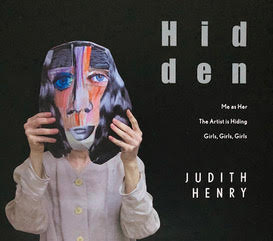 For over 40 years, Judith Henry has explored representations of identity and authorship. In two recent series, Me as Her and The Artist is Hiding, she continues in this vein, using masks and photography to probe the genres of celebrity portraiture and abstract painting.

Me as Her is haunted. In a series of moody and humorous black and white photographs, Henry covers her face with pictures of iconic and deceased women. They span age, race and era. In one, Henry appears as silent film star Anna May Wong. Lounging at a marble topped bar, the actress stares seductively into the camera. Later, she is comedian Imogene Coca, smoking with ironic elegance amidst a messy construction site. The series is shot throughout Henry’s neighborhood of Williamsburg and continues her longstanding fascination with masks as contradictory symbols of power and self-erasure.

Me as Her extends Henry’s practice of commingling her interior life with the public selves of others. The most explicit antecedent is her earlier work Girls, Girls, Girls. In that series, Henry creates drawings based on the yearbook photos of teenage girls from different decades, locations and social strata. She then uses these drawings as masks, shielding her own face in photographic reenactments of the original yearbook picture. While Me as Her echoes this gesture, it also departs from it significantly. Rather than creating handmade portraits, Henry sources all her images from the Internet. Further, she chooses from among the most recognizable portraits of her subjects. In their ubiquity, the faces of these women are everywhere and nowhere. They are placeless in a manner that defies ownership—theirs, ours or Henry’s. This vacancy is the space the artist occupies, revealing herself through the choice of subjects, locations and the appearance of her hands.

Adding to this sense of dislocation is Henry’s decision to ground her portraits in Williamsburg, Brooklyn. Once a hotbed of bohemian living, Williamsburg has arguably become a high priced simulation of itself, its own artistic legacy used as a virtual backdrop. Henry has spoken of her choice to photograph in this area as a way of ‘interacting within and around a community that is generations from myself.’ However, as is often the case, Henry’s interactions are not so simple. At first exposure, many of her subjects exist humorously within their settings: Virginia Woolf perches languorously over a book, Dorothy Lamour vamps in a vintage shop, and Susan Sontag leans against a graffitied wall. A spray-painted diamond protrudes behind the writer’s head like a sparkling thought bubble. However, as the succession of pictures unfold, something else emerges. In a bar seemingly inspired by fin de siècle Paris, Edith Piaf’s glamorous posturing goes unnoticed by the younger denizens cropped at the edge of the frame. Similarly, Carmen Miranda’s implausible resurrection receives the backs of trendy young bar patrons. The indifference is mutual. All of Henry’s surrogates only have eyes for the camera. They smile, glower and reflect into the lens, locked in their posterity, untouched by their surroundings. And where is the artist? For Henry, these women occupy a set of contradictions central to her work and life. They are both available and absent, timeless precisely because their identities are so well dispersed. Their portraits are frozen, a fulcrum around which time can move. In Henry's hands, the women become a fixed marker against which her life is measured, compared and possibly occupied.

The Artist is Hiding is similarly evasive. In the series, Henry is photographed standing in front of various paintings. The works, all made by the artist, are discontinuous in style, palette and surface. So Obvious is filled with Pollock-esque scribbles while Target percolates with chromatic cylinders in the spirit of a Sonia Delaunay. In other compositions, Henry seems to discard historical referent altogether. Yet attribution is dubious. In each picture, the artist holds a mask over her face. The masks, painted and collaged, correspond with the painting behind them. Some play their role smilingly. In Makeover, a woman's sanguine face blends harmoniously within a pastel composition. In Kiss the paper mâché visage nearly dissolves into the atmospheric gray of the painting behind it. Other players steal the show. The avatar of Lick is equal parts alluring and grotesque. Collaged with female faces ripped from advertisements, the mask is a femme Frankenstein in the spirit of a Hannah Höch collage. The avatar lustily licks the canvas in a gesture that unapologetically announces a subject.

Henry has discussed this series as a commentary on the current proliferation of abstract painting in the gallery system. Significant to this statement is the fact that each painting exists on one surface. The works are painted one on top of another in an endless succession. This evolving backdrop registers a wry critique of a market system that celebrates superficial novelty, both in the persona of the artist and their ‘signature style’. Henry’s process of invention and erasure also contains a defiant refusal. By destroying unique paintings in service of her reproducible photos, Henry signals her unwillingness to comply with the traditional expectations of painting. There will be no trademark style, no contained composition or fixed persona. The works and their meanings are as transitory as the masks the artist grasps and discards.

In spite of all her refusals, this project is not a dour deconstruction. The artist is clearly having fun. The paintings and masks are vibrant, inventive and absurd; the multiple styles are joyful exercises in role-play. In Henry’s work, these contradictions and anonymity are a source of freedom. Who cares if one painting is terrible, who takes credit for the beauty of another?  By eliding identification, she has found a way to let her many selves speak. Seen in this light, the act of hiding is less avoidance than wily escape. In The Artist is Hiding, Henry has created a space of her own, one set apart from the societal constraints of market, gender and genre that would seek to limit her.